My legendary kitchen disaster on Mother's Day. And the very personal video for your mom (with tears guarantee).

"A lso sweetie ... you know ... um, it already is I'm half past twelve and Mama and I are really hungry. So ... we have to stay in bed for a long time? About ...? "My daddy is in pajamas in front of the kitchen door, peering through a small gap. He can not see much, then I hold the kitchen door with all my physical strength and protest vociferously. I am nine years old. And it's Mother's Day.

About three and a half hours ago, I woke up in my nursery - and had a brilliant brainwave. To the - hidden under my desk - Biedermeier bouquet with fancy hole paper cuff and the painted picture, there should be something very special for my mom today: a home-baked cake for breakfast! I had never baked alone and found the idea incredibly fantastic. So I fished the only available in our household cookbook (included with the AEG stove and with recipe photos in send 70s yellow umber tones) from the hall cabinet and looked for a suitable recipe. Not so easy, if you did not plan the whole thing and also did not buy any ingredients. Because of lack of raw materials, I had to discard the Linzer Tor just as fast as the Frankfurter Kranz. But the quark oil bags with apricot filling would certainly work great! We did not have any apricots in the storage cupboard and the quark would have to be solved differently ... but it would still be great for my mom. I was absolutely sure of that.

Three hours later, I still found the idea great. Although the execution may have been a bit more complicated than originally thought. Who would have guessed that all the flour would topple over and the margarine would spread evenly on the floor? The three thousand small white speckles that the dough and the mixer had left on the tiles were, however, mostly wiped away again. The bigger problem though was that my parents woke up hours ago. And increasingly persistently demanded coffee and food. But I had strictly forbidden them to leave the bed. The surprise should finally stay one! Dad, back to bed!

At some point at lunchtime, I proudly presented my hungry parents with my Mother's Day quark oil bags. Or at least what had become of it: crumbly, falling pancake with slippery half-peaches as filling. Not only that there were significant deductions in the B-note, the things tasted absolutely terrible. And the kitchen looked like ... as she's never expected to have seen before. 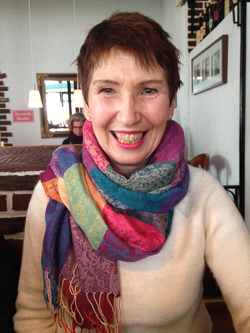 Surprisingly enough, the Quark Oil Bag Kitchen demage has become one of Mother's most beautiful Mother's Day memories of which she is still enthusiastically talking today. The last 34 years have thrown a rosy veil over gnawing hunger followed by hours of kitchen cleaning according to German housewife standards. And what's left is the memory of the world's most delicious crumbly peach patties and lots of love. I would say that I and the peaches were very lucky! :-) The past 34 years you can see my mom by the way, not a bit.Much love for Mother's day. Mommy!

Whatever you have prepared for your mom (you should probably refrain from totally new kitchen experiments) - a small personal video greeting with lots of love is certainly not wrong. Just in time for Mother's Day, Kaufland has released a wonderfully emotional video that you can also personalize with a very personal message to your mom at the end and send it as a link, via Facebook or WhatsApp. You can easily enter your custom message and create your own personal movie (click and scroll down a little bit).

I would say that sounds pretty much like a tranche guarantee with commemorative value, right?

© Copyright 2019 Unofficial site of Szechuan Garden
All rights reserved. This site is in no way affiliated with or endorsed by Szechuan Garden. It exists as a compendium of supporting information intended for informational purposes only.

If you want to buy this website, please don't hesitate to contact us via e-mail: domain (dot) sales (dot) org @ gmail (dot) com